If you have a child in middle school or have watched the news recently, you’ve probably heard about the hottest new toy on playgrounds nation-wide: Fidget spinners. Originally marketed as a tool to help students focus, especially those with ADHD, anxiety, and autism, the toys gained viral attention after a surge of YouTube videos were posted featuring various fidget spinner “hacks and tricks.” Now, fidget spinners are being banned in schools and homes worldwide for causing distraction and posing a potential choking hazard.

Although written off as just another fad, fidget spinners have brought attention to the fidget tool market- products specifically created to accommodate the tendency to fidget. When these tools are designed in a thoughtful way, they actually serve as an aid in concentration, not distraction. The distinction between creating a toy and creating a fidget tool is in the intention of use; While a toy is used for its entertainment value, a fidget tool requires no visual focus and is used purely for the enjoyment of the experience.

Traditionally, the professional world has abhorred fidgeting. Common fidgets such as tapping a pen and bouncing your knee are seen as signs of frustration, impatience, and boredom. We have been taught that acting professional means sitting still and being attentive when, in reality, the two are far from exclusive. In fact, Hungarian psychologist Mihaly Csikszentmihaly believes that fidgeting may be fundamental for job performance and productivity.

In recent years, the benefits of fidgeting have been the focus of many research studies. John J Ratey, M.D., an Associate Clinical Professor of Psychiatry at Harvard Medical School, has shown that small repetitive movements can increase neurotransmitter levels in the brain- boosting the ability to focus, improving memory, and curbing daydreams. This means that while your coworkers may find your foot tapping distracting, odds are you’re deep in concentration.

Mike Karlesky, a PhD student at NYU’s Polytechnic School of Engineering, takes his research in a different direction- looking at the objects that people fidget with. In an effort to distinguish whether or not fidgeting is actually a part of work, he created a Tumblr called Fidget Widget and asked people to submit the items they fidget with. From homemade gadgets to items with sentimental value, it’s clear that every person has distinct individual fidget preferences.

Although fidget spinners may be more profitable as toys than as fidget tools, dozens of other products are widely successful in helping workers harness nervous energy and stay focused. If you’re a constant fidgeter or just want to test out the power of fidgeting, there are a wide variety of options other than the classic pen clicking or stealing your child’s fidget spinner. Check out a few successful products below!

Antsy Labs’ Fidget Cube started out on Kickstarter and raised $6.4 million, well beyond their original $15,000 funding goal. Each side of the cube offers something new to fidget with: “Click. Glide. Flip. Breathe. Roll. Spin. ™” With its sleek professional look, the Fidget Cube looks right at home in the office, even on the desk of the CEO. 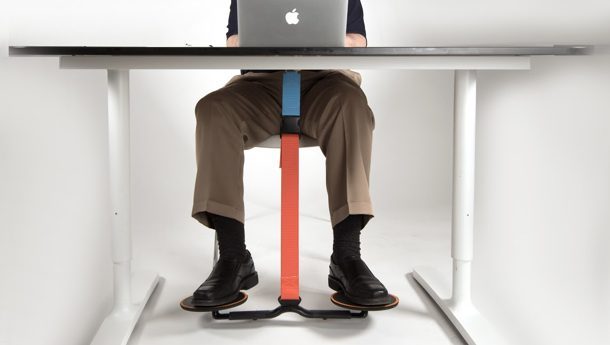 Especially useful for habitual foot tappers and knee bouncers, the Hovr debuted on Indiegogo and raise $563,369, 1308% of its original goal. It serves as an under-the-desk swing for your feet and allows you to mimic walking or just sway your legs back and forth. It comes in two versions: one that mounts directly underneath your desk and one that is portable. As a bonus, it also promotes wellness by helping you burn calories! Hovr won NeoCon’s 2017 Gold Award for The Best of NeoCon: Office Accessories. 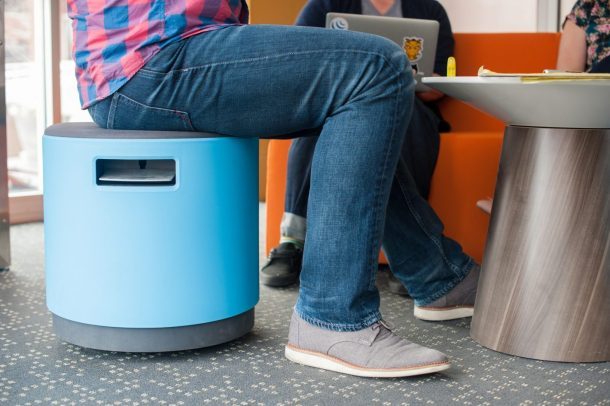 Designed for today’s movers and shakers, Turnstone’s Buoy is a seat that’s as active as you are. Whether you’re a knee bouncer, a pencil tapper, or you’ve got jazz hands, Buoy lets you move freely. The curved base engages the core and encourages active sitting, increasing concentration and promoting wellness. At only 20 pounds the Buoy is perfect for touchdown meetings or a break from your everyday office chair.